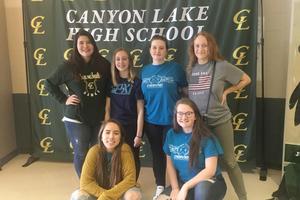 The CyberPatriot program attracts students across the United States and Canada in both high school and middle school with hands-on cybersecurity competitions, and one Comal ISD high school team earned a first place this year.

An all-girls AJROTC CyberPatriot team from Canyon Lake High School won first place in the Silver Tier Semifinals of the All Service Division of this year’s CyberPatriot XI competition. This is the first time a CLHS team qualified for the semifinals.

Led by retired Lt. Col. Michael Collyer who is the CLHS JROTC instructor, the team excelled in qualifying rounds of this year’s CyberPatriot XI competition.

“They demonstrated teamwork, critical thinking skills and technical knowledge which are key to a successful career in cybersecurity,” Collyer said.

The competition puts teams of high school and middle school students in the position of newly hired IT professionals tasked with managing the network of a small company. In the rounds of competition, teams are given a set of virtual images that represent operating systems and are tasked with finding cybersecurity vulnerabilities within the images and hardening the system while maintaining critical services in a six-hour period.

Teams compete for the top placement within their state and region, and the top teams in the nation earn all-expenses paid trips to Baltimore, MD, for the National Finals Competition where they can earn national recognition and scholarship money.​